Over the past decade, the geological model has become more sophisticated and has evolved into the three-dimensional numerical geological model. This is represented in a computer with the information, such as subsurface structure, reservoir rock properties, and oil and natural gas distribution.

The evolution of this technology has been driven by the advance of computer technology and three-dimensional seismic surveys. And, geostatistical methods have recently contributed to create even more sophisticated geological models.

Three-dimensional numerical geological modeling technology has become crucial for planning the location of development wells and well traces, and for creating data into reservoir flow simulations in the development of oil and natural gas. In exploration as well, the trend of estimating original oil and gas in place by three-dimensional numerical geological models is now well established.

Extended Reach Drilling (ERD) is a technology for drilling longer horizontal wells at a high inclination angle to reach underground oil/natural gas deposits further away from the drilling spot, instead of drilling wells vertically.

In exploration and development of oil and natural gas, we drill wells to reach subsurface deposits where oil/natural gas is likely trapped. However, in the event we are unable to drill wells from directly above these deposits, since mountains, rivers, or town areas overlie them, we drill wells from surface locations at a short distance away, using the directional drilling technology. ERD is an advanced version of the directional drilling technology. More specifically, drilling at a high inclination angle allows for drilling horizontal wells even longer distances.

In recent years, the ERD technology has been increasingly adopted in E&P projects. For instance, using the technology, we are able to locate and produce oil or natural gas from deposits below the seabed by diagonally drilling horizontal wells from the land, rather than constructing offshore platforms directly above these deposits and drilling vertical wells to reach oil/natural gas.

This is a sedimentary facies model integrated by the results of seismic data and well data analysis. 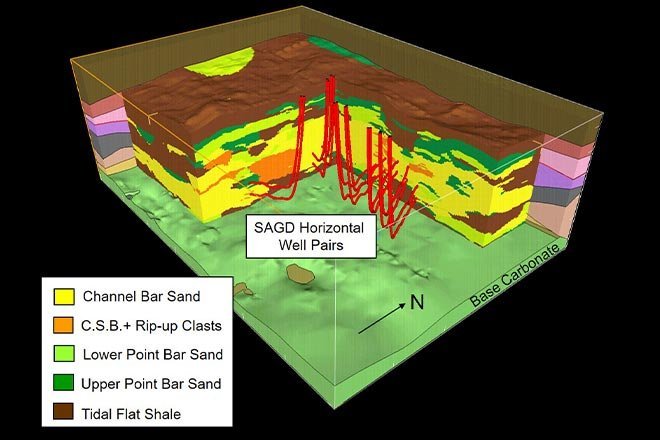 These are reservoir models by the deterministic method (left) and the geostatistical method (right).

The fluid behavior of oil and natural gas production and injection can be simulated accurately by using the latter, higher-resolution model. 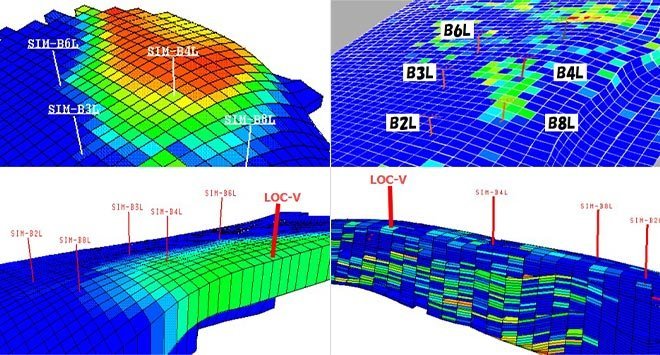