About Oil and Natural Gas

For many years, JAPEX has worked on development and production of oil and natural gas, which are energy resources called fossil fuels.

Fossil fuels are formed from prehistoric organisms decomposed underground over several to tens of millions of years, and are now available for use as energy resources. Fossil fuels in the liquid state is called oil, while those in the gaseous state is called natural gas.

Both oil and natural gas are made up primarily of hydrocarbon (H), which is a chemical compound consisting entirely of carbon (C) and hydrogen (H). They can be classified further into a variety of types depending on the structure of molecules and how they are bound.

Oil generally refers to a liquid composed mainly of hydrocarbons and containing some sulfur (S), nitrogen (N), and oxygen (O). Crude oil is a liquid extracted from oil fields underground from which gas and water are removed. 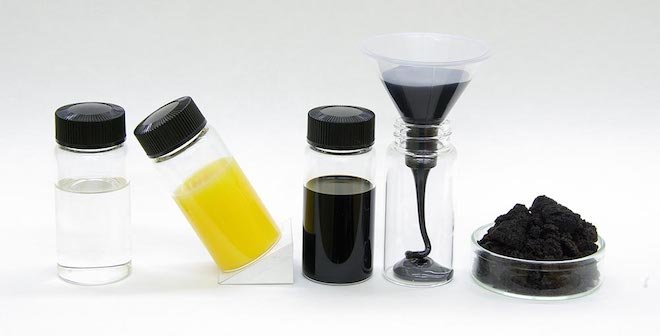 By applying heat and taking advantage of different boiling points, crude oil can be distilled and separated into oil. Oil, then, can be classified further, by the level of its density (API*), into light, medium and heavy oils, each of which are used for purposes that fit its properties.

Gasoline (naphtha) and diesel oil, which are light in consistency, are used mainly as fuels to power vehicles and machines.

Oils that are medium to heavy inconsistency are used mainly as fuels for powering large-size machines, vessels, and airplanes, as well as for generating electric power. Heavy oils are used also as raw materials for chemical products such as plastic bottles, plastic products, and fibers.

Natural gas is a flammable gas composed mainly of methane (CH4), which is colorless, odorless, and lighter than air. Natural gas is considered as the energy source with a lower environmental impact than other fossil fuels given its less emissions of carbon dioxide (CO2), nitrogen oxide (NOx), and sulfur oxide (SOx) when burned.

Natural gas is mainly distributed as city gas to general households and other users. It is also in high demand from large-scale plants and industrial facilities, as well as for power generation. Natural gas is also used as raw materials for chemical products.

Origin of Oil and Natural Gas

Oil and natural gas are formed underground, over several to tens of millions of years, from prehistoric organisms decomposed by high subterranean heat and microorganisms. Oil and gas collect in formations underground, where they are prone to accumulate, to form oil/gas fields.

How Oil and Natural Gas Are Formed

[4] Oil and natural gas then accumulate

How oil and natural gas are formed