JAPEX has been making efforts to develop renewable energy sources, such as biomass, wind, photovoltaic, and geothermal.

In renewable energy projects, we leverage our oil and gas E&P technologies such as surveying subsurface structure and drilling, expertise in constructing and operating natural gas power plants, and our experience in building good relations with local communities.

Besides, we have roles in the operation phase of the participating projects, including asset management, fuel procurement, and others.

JAPEX has been participating several biomass development projects in Japan. We also have been pursuing the possibility of participating in additional projects related to biomass power plants, including large biomass power plants that use general wood as fuel; and small biomass plants that use unused domestic wood as fuel, which is an energy source produced and consumed locally.

JAPEX currently is involved in the operation of two mega-solar power plants with a generating capacity of 1,000 kilowatts or more in Tomakomai City, Hokkaido. We have been exploring opportunities to participate in especially new mega solar power projects.

JAPEX has been studying geothermal power generation since 1970s. In recent years, we have conducted feasibility studies primarily in Hokkaido and the Tohoku region. Geothermal power related businesses, which use hot steam and water rising from underground, have much in common with the oil/gas E&P business in that both explore resources underground.

Geothermal power generation is expected to help ensure stable supply of energy in all weather. Also, hot water returned from power generation can be used for hot water supply, heating, and greenhouse culture, ultimately contributing to revitalization of regional communities. 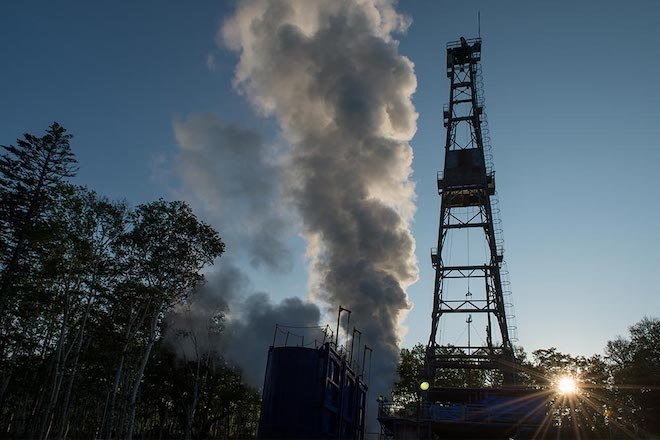