Methane hydrate is confirmed to exist abundantly in the sea near Japan and is expected to become one of the domestic energy resources of the future. With the aim of realizing commercialization in the private sector, the government is currently leading the development of technologies and the evaluation of the amount of resources.

JAPEX is participating in the government-led efforts for the commercialization through establishing the methane hydrate production technology, aiming at developing and producing it on its own in the future.

Methane hydrate is the crystallization combined with water and methane, the principal component of natural gas, and is called "fiery ice" because of its shape. It is known that methane hydrate exists in places such as beneath the seabed over 500 meters deep at low temperature and high pressure, beneath permafrost layers in the polar regions, and beneath high mountains.

The following two types of methane hydrate have been confirmed to exist in the sea areas around Japan: 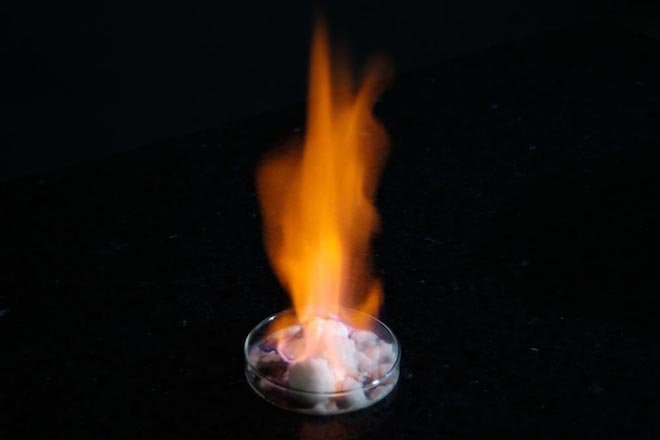 In the Japanese government's Plan for the Development of Marine Energy and Mineral Resources, which was revised in February 2019, technology development to enable future commercial production will have been continuing with the goal to initiate commercial projects led by the private sector between FY2023 and FY2027 (*1).

Currently, the research on the development and production technology of the pore-filling type methane hydrate is conducted by the MH21-S R&D consortium. In addition, the technical research on the shallow type methane hydrate development and production technology is conducted by the National Institute of Advanced Industrial Science and Technology (AIST).

The offshore production tests of pore-filling type methane hydrate have been conducted twice in Daini-Atsumi Knoll, located along Atsumi Peninsula in Aichi Prefecture to Shima Peninsula in Mie Prefecture.

The first offshore production test in 2013 successfully produced gas from methane hydrate layers in offshore for the first time in the world. The second test in 2017 the effectiveness of confirmed countermeasures against the issues in the first test as well as continuous gas production for several weeks. However, many challenges still have been recognized to the commercialization of methane hydrate production.

*1: "Plan for the Development of Marine Energy and Mineral Resources", published by the Ministry of Economy, Trade and Industry on February 15, 2019