The reservoir, called the oil sands layer, is a complex mixture of sand and mud layers with various thickness and proportions, of which the sand layer contains ultra-heavy oil called bitumen.

JAPEX had involved in the exploitation of the oil sands layer in Canada since 1978, and had contributed to the establishment of a bitumen production method called the Steam-Assisted Gravity Drainage (SAGD) method. To improve the production efficiency of bitumen using the SAGD method, we were using geological modeling technology with multiple-point geostatistics.

Note) JAPEX has decided to end our participation in the oil sands project of the Hangingstone Leases in Alberta, Canada in July 2021 and completed to transfer the share of an operating company in September 2021.

Geostatistics is a statistical science that models and characterizes the spatial and temporal relationships of various phenomena in nature. It is one of the fields of applied mathematics that evolved from the prediction of underground reserves of natural resources.

Geostatistics plays a crucial role in oil development to evaluate reservoirs and delineate their distribution. One of the best geostatistical methods that can reflect the formation process of the strata is the multiple-point method.

In the development of oil sands in Alberta, Canada, we evaluate heterogeneity in the distribution of sand and mud layers based on the geological model we have constructed for the oil sand layer, which is a complex formation, in order to improve production efficiency. In another project, we employ the multiple-point method to build and evaluate geological models of complex reservoirs such as volcanic rock reservoirs.

In oil sands layers, where sand and mud layers are intricately mixed, mud layers works as a barrier to the steam injection by the SAGD method, resulting in lower production efficiency.

The oil sands layer developing by JAPEX in Alberta, Canada, is believed to have deposited under a meandering river environment. Based on this assumption, the oil sands layer is divided into two types of deposits: point-bar deposits and abandoned-channel deposits. The distribution of sand and mud layers (lithology distribution) within each type is estimated in a four-step workflow. 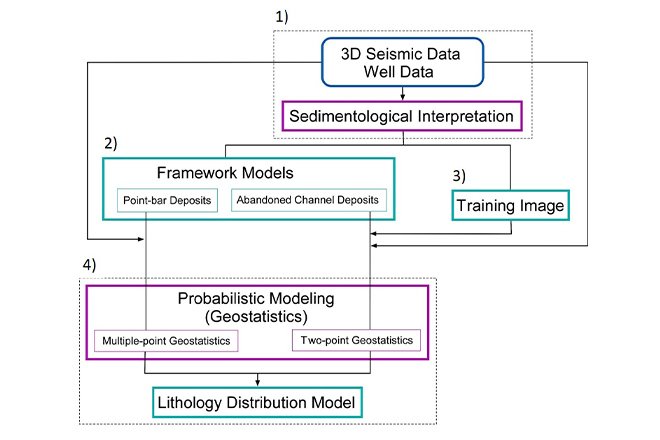 Fig. a) shows 3D seismic data. The colored lines in Fig. b) are interpreted as depositional/erosional surfaces within point-bar deposits and the walls of the abandoned channel. In this case, the well data is used to aid the interpretation.

In Fig. c), the colored lines interpreted in Fig. b) are selected and integrated to build a framework model.

Build a framework model based on the interpreted lines drawn in Fig. c) in 1). 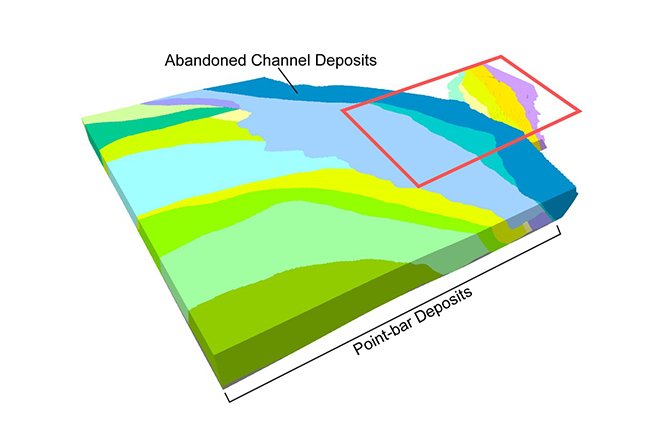 The concept in building a Training image for lithology distribution of point-bar deposits
(Source: Tsuji et al. 2013 (c) The Geological Society of Japan *1)

This is an example of a geological model (sand layer and mud layer distribution) constructed using the multiple-point and two-point methods. The constructed model is partially cut out and used to predict the performance of production with the SAGD method. 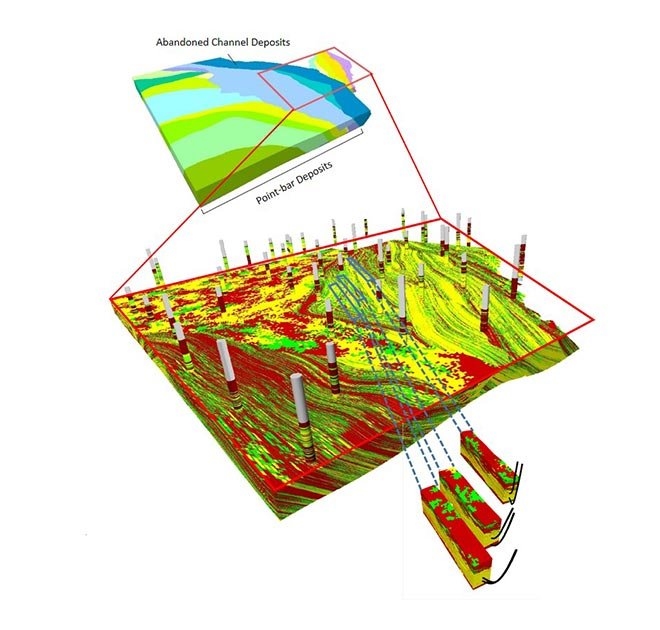