Geomechanics is a discipline to predict and control mechanical deformation and failure of underground rock. Using various data acquired during drilling and fluid production/injection operations, we evaluate the mechanical state of underground and its changes over time based on geomechanics.

Activities in development and production of oil and natural gas, such as drilling wells, production of crude oil and natural gas, injection of fluids for improved oil recovery (IOR), enhanced oil recovery (EOR), and well stimulation, may change the mechanical state (effective stress) of the underground. Consequent compaction or expansion of the rock or initiation and propagation of fractures can change the flow path of the fluid or permeability, affecting the production behavior of crude oil and natural gas. The changes in the mechanical state may also raise risks in surface subsidence or uplift as well as induced earthquakes.

Geomechanics enable us to investigate the various monitoring data and to analyze the mechanical state of underground and its consequences to ensure safe and efficient development of oil and natural gas. 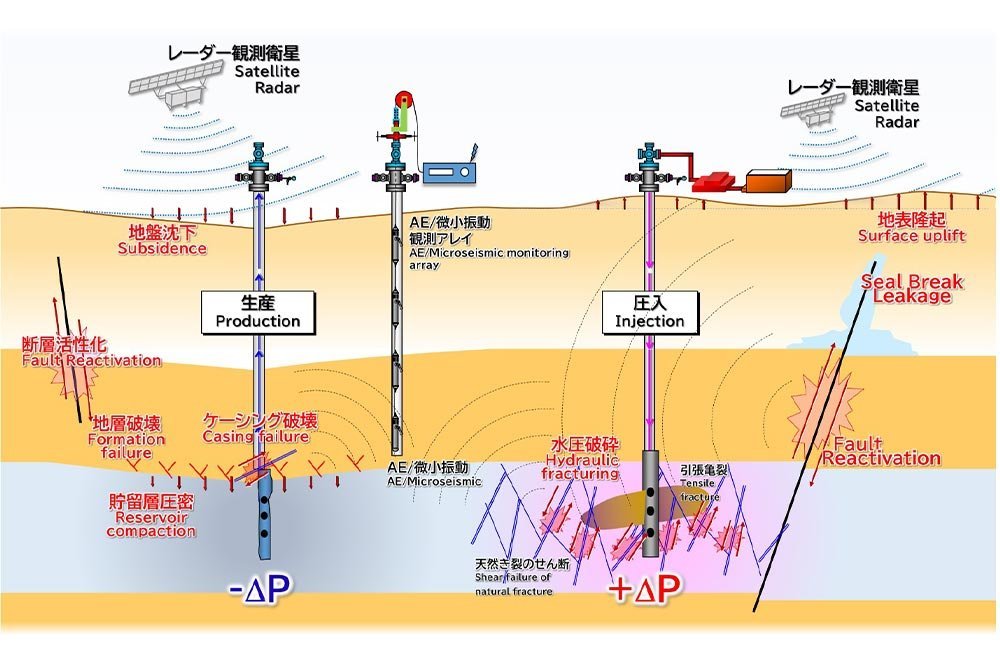 Geomechanics study is based on geomechanical model and starts with its construction.

Geomechanical model is a numerical expression of the distribution of the fundamental elements of geomechanics including pore pressure, principal stresses, and mechanical characteristics of rock such as deformation moduli and strength parameters. Prediction of the deformation and failure of rock is achieved either by analytical or numerical approach depending on cases.

JAPEX is also developing technologies for coupled geomechanical and fluid flow simulation, and applying them in actual fields. The technology enables us to predict and evaluate changes in stress state and formation deformation and failure caused by the operations of producing formation fluids such as oil and natural gas and injecting various work fluids into formations, which is useful for designing the actual operations.

The study workflow implements the Plan-Do-Check-Action (PDCA) cycle. The workflow is initiated with the construction of the geomechanical model, which is then used to evaluate the mechanical changes and develop an operation plan (Plan). During development and production operations (Do) according to the plan, observations (Check) of mechanical changes, such as actual wellbore failure and sand production, are obtained and fed back to the geomechanical model to revise (Action) the operation plan.

Monitoring techniques are key tools to monitor geomechanical changes such as formation deformation and failure and to close the loop of the PDCA cycle. Research and development of monitoring technologies are important functions of JAPEX Research Center and our group companies and the technologies are also used in the technical service business of the group companies.

Satellite monitoring with remote sensing technology is used for efficient monitoring of the land surface over a wide area.

In-SAR (Synthetic Aperture Radar) enables monitoring of surface deformation (uplift and subsidence) with the resolution even at a few milli meters. The JAPEX Group has been working on applying InSAR to various fields including overseas carbon dioxide geological storage fields and oil sands development fields to successfully observe surface deformation of the fields during the operations.

We are also working with geomechanical simulation to predict subsurface fluid flow and mechanical changes from the surface observation during the operations.

Shear slip at the plane of cracks in the underground rock mass generates the elastic waves (acoustic emission (AE) and microseismic) and, therefore, AE monitoring allows us to estimate the location, size and orientation of the cracks and the focal mechanism of the shear slip.

AE monitoring may be performed during hydraulic fracturing for tight oil and gas development, and help understand the stimulation area and mechanism underground.

Long-term fluid injection operations for carbon dioxide capture and storage (CCS) may require a permanent monitoring. JAPEX Research Center designs a remote and real-time monitoring system based on the experience from the monitoring in our oil and gas fields.