JAPEX has been working on the development of a variety of EOR technologies.

What is Enhanced Oil Recovery (EOR)

Crude oil flows out from wells drilled into the formation (reservoir) where the existence of the oil is confirmed, caused by the energy (pressure) of the reservoir. However, the amount of crude oil that can be recovered by the energy of the reservoir alone is said to be less than 30% of the total amount of crude oil in the ground. Accordingly, technology to increase the recovery factor of existing oil fields is as important as the discovery of new oil fields, and various technologies are being applied and studied.

In general, the development of oil and gas field is classified into the following three phases: 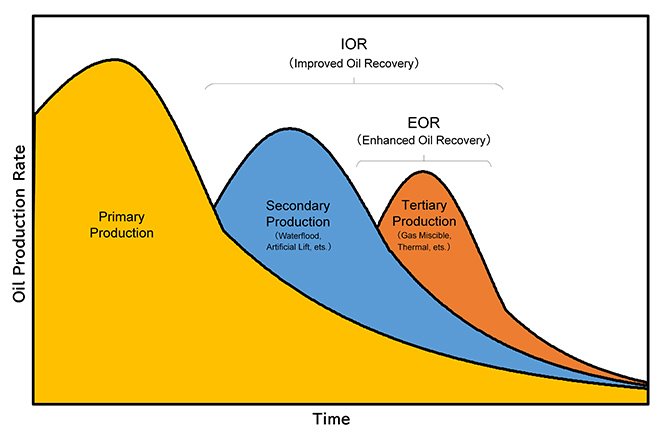 JAPEX has the proven track records applying various EOR technologies at some crude oil and other production operation sites in Japan and abroad.

Also, JAPEX has a number of key technologies that are important factors for EOR studies.

JAPEX Offshore, Ltd. (JPO), one of our subsidiaries, applied the gas injection method, a type of EOR, to the Iwafune-oki oil and gas field (*) in January 2006, for the first time on a commercial scale for an offshore oil field in Japan.

In 2002, we began to study the application of EOR as a countermeasure against the decline in crude oil production and conducted a pilot test in December 2004 in our main reservoir (2,100 m layer) based on the conclusion that the method of injecting gas into the top of the reservoir structure (the gas injection method) is effective. Given the positive results of the pilot test, we started the gas injection method on a commercial scale in January 2006. The implementation of the method until December 2017 has improved the crude oil recovery factor of the relevant reservoirs and extended the production period by more than 10 years from the original assumption of expected profitability termination.

In addition, to further increase the amount of crude oil recovered, we have applied the Water Alternate Gas Injection (WAG) method to the same layer since January 2018.

Effects of increasing crude oil production by implementing the gas injection method in the 2,100 m layer of the Iwafune-oki oil and gas field